For a great gift idea, brighten the holiday season

with a DVD of our heart-warming film!

The students at Concord High learn how to change their mind by practicing mindfulness for just three minutes a day.

If they can do it so can you. 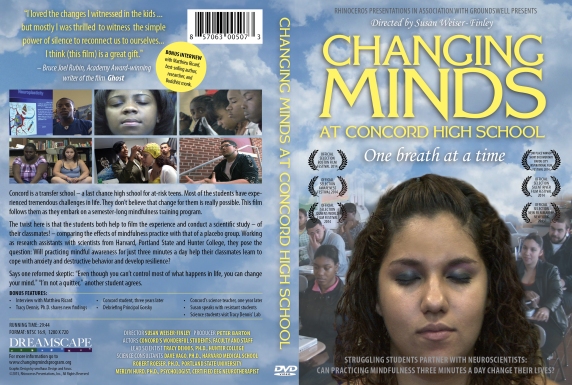 If your local library  has purchased a copy from Dreamscape Media, you can borrow the DVD for FREE using your library card.

Also, Hoopla Digital, distributes the film digitally. If a library system is signed up for hoopla, then anybody with that library’s card can use hoopla for FREE on their phone, tablet, or computer.

You can learn more here: https://www.hoopladigital.com

If your library doesn’t stock Changing Minds at Concord High School, please encourage your librarian to order a copy.

Libraries and schools can order online from Dreamscape Media

“Of course I loved the changes I witnessed in the kids over the ten week period and was heartened to see the results on charts as well as in their words as they referenced their experiences, but mostly I was thrilled to witness the simple power of silence to reconnect us to ourselves. … The information you offer is remarkable, offering huge promise and potential for anyone willing to pay attention to what it shows.   I think it is a great gift that you made this film and I hope it is widely disseminated. “

“What this film does is capture in its raw and vital way a process in which young people have been given the tools to change their own brains, and therefore change their prospects in life. It is thrilling to witness the break-through moments, and I am pleased that we were able to provide such a meaningful film a platform at the Rubin Museum of Art.” 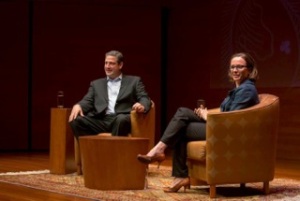 History — For the last decade, filmmaker Susan Finley had been integrating video production programs into the curriculum of at-risk schools to make learning more engaging and relevant.

During that time, she realized that many of her students were suffering from emotional and cognitive challenges and had a history of academic failure that made it difficult for them to learn.

She knew from personal experience that mindfulness practice could provide students with a strategy to regulate attention and emotions.

When she learned about new scientific findings that confirmed those benefits, she had an idea:

The Pilot Program — Partnering with neuroscientists (from Harvard, Portland State University and Hunter College) Susan designed a pilot program that integrated both the science and mindfulness practice into the school day.

At-risk high school students from Staten Island, many facing their last chance to graduate, would practice mindfulness for just three minutes a day for a semester as part of a school-wide science experiment. Students in a science class would act as research assistants for lead scientist, Tracy Dennis, PhD. to see if their classmates benefited from the practice.

Working with award-winning filmmaker Peter Barton and students in a video production class we filmed the entire process.

September 2014, the film Changing Minds at Concord High is an official selection of The Awareness Film Festival.

One response to “The Film”